cbd and cbg working together

CBD and CBG are both compounds found in the hemp plant, and they are thought to have similar mechanisms of action by interacting with the body’s endocannabinoid system (ECS).
This means that the combination of CBD and CBG may have a greater potential for treating certain conditions than either compound alone.
Research has suggested that CBD and CBG may work together to enhance their therapeutic potential. Some studies have shown that CBD may enhance the effects of CBG, and vice versa. For example, a study suggested that a combination of CBD and CBG may be more effective in reducing inflammation than either compound alone.
CBD is the most abundant cannabinoid in the hemp plant, and it is known for its anti-inflammatory, anti-anxiety, and pain-relieving properties. It works by interacting with the ECS, specifically with CB1 and CB2 receptors, which are found throughout the body. CBD does not bind directly to these receptors, but instead it modulates their activity. By doing so, it helps to balance the ECS and restore homeostasis, which can have a positive effect on many physiological processes.
CBG, on the other hand, is a less abundant cannabinoid that is gaining attention for its potential therapeutic benefits. It has been shown to have anti-inflammatory, antioxidant, and neuroprotective properties. Like CBD, CBG interacts with the ECS, but it also has an additional mechanism of action.
Research suggests that CBD and CBG may have complementary effects when used together. For example, studies have shown that CBG may enhance the pain-relieving effects of CBD, and that the combination of the two compounds may be more effective at reducing inflammation than either compound alone.
CBG has also been found to inhibit the uptake of anandamide, an endocannabinoid that plays a role in pain and mood regulation, which could help to prolong the effects of CBD.
Furthermore, there is also evidence that CBD and CBG may be helpful in treating certain conditions such as irritable bowel syndrome, glaucoma, and Huntington’s disease. CBD has been found to help with reducing the symptoms of anxiety, depression and chronic pain and CBG has been found to be effective in reducing symptoms of Inflammatory Bowel Disease and treating glaucoma. Combining CBD and CBG may have a synergistic effect that could be beneficial in treating these and other conditions.
It is important to note that more research is needed to fully understand the interaction of CBD and CBG and their potential therapeutic benefits. Nevertheless, the available evidence suggests that the combination of these two compounds may be a promising approach in the treatment of various medical conditions. It is also important to note that always consult a medical professional before taking any new supplement or medication
PrevPreviousdid you know we all make cannabinoids! 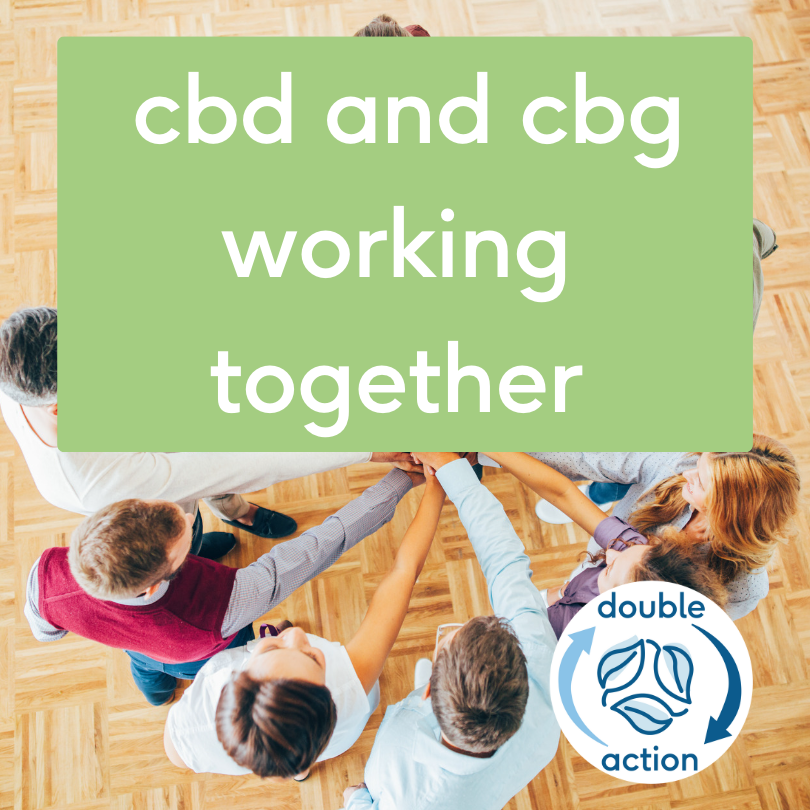 cbd and cbg working together

CBD and CBG are both compounds found in the hemp plant, and they are thought to have similar mechanisms of action by interacting with the

did you know we all make cannabinoids!

medicines known to interact with cbd

although cbd is generally a safe product, there can be interactions with certain prescription medicines. any prescribed drug that interacts with grapefruit will interact with

cbd & wfh 🏠⁠ 5 positive effects 🤩⁠ ✅ a sense of control – cbd helps to bring down anxiety, especially important as everything around

how to reach your 2️⃣0️⃣2️⃣1️⃣ goals with cbd

why don’t we get UK cbd? 🇬🇧🤷‍♂️ we actually grow loads of hemp in 🇬🇧 but weirdly it’s illegal to process the flower 🍃(which

These products are not for use by or sale to persons under the age of 18. These products should be used only as directed on the label. It should not be used if you are pregnant or breastfeeding. Consult with a doctor before use if you have a serious medical condition or use prescription medications. A Doctor’s advice should be sought before using this and any supplemental dietary product. All products contain 0% THC. All trademarks and copyrights are property of their respective owners and are not affiliated with nor do they endorse this product. These statements have not been evaluated by the FDA or the MHRA. This product is not intended to diagnose, treat, cure or prevent any disease. By using this site, you agree to follow the privacy policy and all terms & conditions printed on this site. Void where prohibited by law.